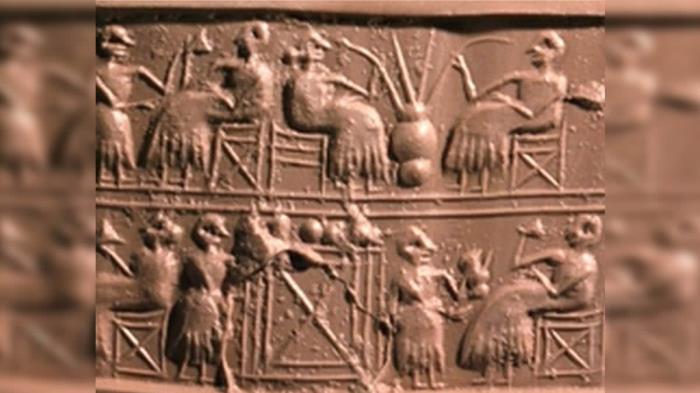 The oldest beer advertisement in the world was "published" in Mesopotamia on a stone slab, which was found to date from around 4000 BC. It read: "Drink Elba, a beer with a lion's heart", accompanied by a depiction of a headless woman with large breasts holding goblets of beer in each of her hands.

Drink Elba, a beer with a lion's heart.

This archaeological artifact was discovered by Alan Duane Eames (1947-2007) who is considered a beer Indiana Jones, and he earned this epithet by searching for beer roots and the role of this drink in ancient societies and culture, which is why he visited 44 countries. He found hieroglyphs about beer in Egypt, sailed the Amazon in search of missing black beer, traveled the Andes on a trail of beer brewed with strawberries the size of a baseball.

With Professor Solomon Katz of the University of Pennsylvania, Eames theorized that beer was an important factor in creating sedentary and civilized societies. Eames believed that beer was the most feminine drink and believed that ancient communities considered beer to be the gift of the goddess rather than the god, and evidence of this is the connection with the beer goddess Ama-Gestin and Ninkasi.

Although there is no evidence for this in the form of photographs or any other document, Eames claimed to have found the oldest beer advertisement, a stone slab from Mesopotamia given around 4000 BC. Eames claims that the board contains the message "Drink Elba, a beer with a lion's heart",  along with a depiction of a headless woman with large breasts holding goblets of beer in each of her hands.