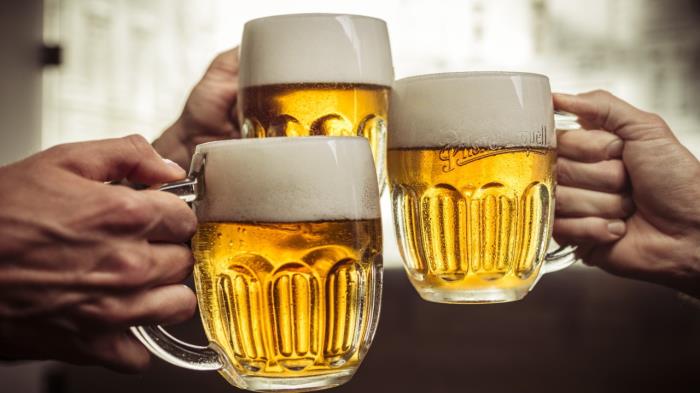 Lager is most popular type of beer in the world. It is conditioned at low temperature (6 to 8 °C). Lagers can be pale, amber, or dark. Pale lager is the most widely consumed and commercially available style of beer. Well-known brands include Carlton Draught, Pilsner Urquell, Molson Canadian, Miller, Stella Artois, Beck's, Budweiser Budvar, Corona, Heineken, Carlsberg, Birra Moretti and Tennents.

As well as maturation in cold storage, most lagers are also distinguished by the use of Saccharomyces pastorianus yeast, a "bottom-fermenting" yeast that also ferments at relatively cold temperatures. It is possible to use lager yeast in a warm fermentation process, such as with American steam beer; while German Altbier and Kölsch are brewed with Saccharomyces cerevisiae top-fermenting yeast at a warm temperature, but with a cold-storage finishing stage, and classified as obergäriges lagerbier (top-fermented lager beer).

Lager beer is served chilled to 5 -14 C º, poured into a glass it gives a rich and lasting foam. It is full of flavor due to the relatively high proportion of unfermented extract. It has a pronounced bitterness and aroma of hops.

Until the 19th century, the German word lagerbier referred to all types of bottom-fermented, cool-conditioned beer in normal strengths. The name lager is used more in the Czech Republic, Austria and Switzerland than in Germany, where beer lovers look for Helles when ordering light lager beer, and the Dutch, for example, look for everyday beer - Bière ordinaire. Pilsner, a more heavily hopped pale lager, is most often known as "Pilsner", "Pilsener", or "Pils". Other lagers are Bock, Märzen, and Schwarzbier. In the United Kingdom, the term commonly refers to pale lagers derived from the Pilsner style.

While cold storage of beer, "lagering", in caves for example, was a common practice throughout the medieval period, bottom-fermenting yeast seems to have emerged as a hybridization in the early fifteenth century.

In the 19th century, prior to the advent of refrigeration, German brewers would dig cellars for lagering and fill them with ice from nearby lakes and rivers, which would cool the beer during the summer months. To further protect the cellars from the summer heat, they would plant chestnut trees, which have spreading, dense canopies but shallow roots which would not intrude on the caverns. The practice of serving beer at these sites evolved into the modern beer garden.

Lager beer uses a process of cool fermentation, followed by maturation in cold storage. The German word "Lager" means storeroom or warehouse. The yeast generally used with lager brewing is Saccharomyces pastorianus. It is a close relative of the Saccharomyces cerevisiae yeast used for warm fermented ales.